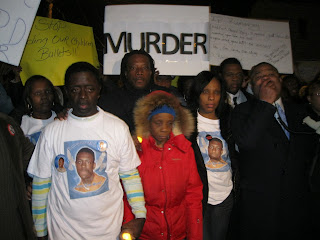 The Bronx community comes together in numbers to protest the police shooting of Ramarley Graham.

18-year old Ramarley Graham was shot this past Thursday by narcotics cops who claimed the young teen had a gun. Surveillance video show the teen running in fear into his home on 229th street with Police hot on his heels. The Bronx teen was unarmed and shot by police in the presence of his grandmother and 6-year old brother. 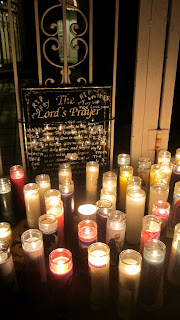 To add insult to injury, Graham's Grandmother, Patricia Hartley was later taken into custody and held for 7 hours while being denied access to her heart medication.


500 plus demonstrators attended a rally to call for an end to police brutality.

"We are human beings. Stop treating us like animals," Frank Graham the slain teen's father, told the crowd. "My son did nothing wrong. I want justice for my son, my baby."

I am angered by this story...Ramarley Graham did not have to die! Unfortunately this is one of many stories in where minority men and women are "mistakenly" killed by police because they saw a gun or weapon.These modern day lynching have to stop!!


Let us address the fact that there are a  handful of racist closed minded "cops" that make it bad for the entire Police Force. Many of these officers are just plain scared, walking around with shaky trigger fingers.

An officers job is to protect and serve the community. How can they achieve this, when the bonds of trust are broken?? Shooting an unarmed man is a deplorable act!! Something has to be done!!

What do you think about this madness??? Remember....

Talk Is Cheap- Drop A Dime On Em!
Follow me on www.Twitter.com/MsChynaBlaQ
Posted by Chyna BlaQ at 3:17 PM