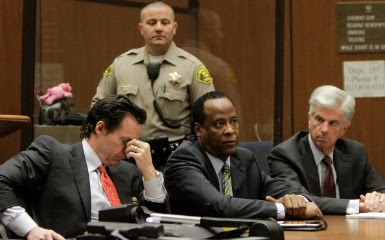 After a two- year legal battle over who is responsible for pop singer Michael Jackson's untimely death...the verdict is finally in! A California jury found Dr. Conrad Murray guilty of involuntary manslaughter. Dr. Murray reacted with little emotion as the verdict was read. Crowds of Jackson fans burst into cheers as they got word of the long awaited verdict.

Despite the guilty verdict, Dr. Murray will spend little to no time in jail.

"Following the announcement of the guilty verdict, Los Angeles County District Attorney Steve Cooley confirmed to reporters that due to those recent changes in California law, Murray was not likely to do any prison time. "It was a homicide, someone lost their life, three children lost time with their father because of someone's criminal negligence," said Cooley when asked if the prosecution was worth it given the almost-certain knowledge that Murray would not spend time in prison. "In that regard, it was worth it to prove that point."-online news

Do you think Dr. Conrad Murray is responsible for Michael Jackson's death? and if so...Do you think his punishment is just???

Talk Is Cheap- Drop A Dime On Em!
Follow me on www.Twitter.com/MsChynaBlaQ
Posted by Chyna BlaQ at 12:06 AM