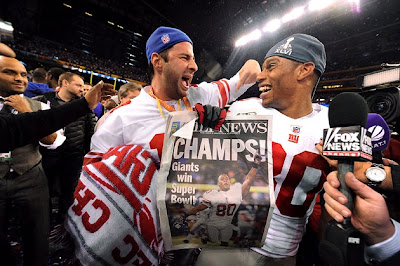 Blue and White are truly the colors of a sweet victory! Like most people I was glued to my set, munching on goodies as watched the Giants win The Super Bowl! And like most people I had to work and could not make it down to see the parade. It is approximated that close to 1 million fans gathered in the Big Apple today to help celebrate the New York Giants' Super Bowl Victory! 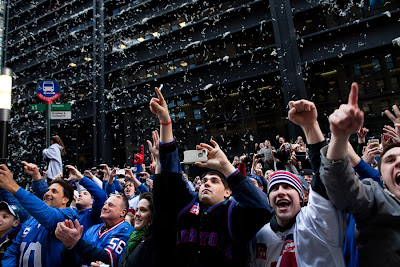 Eli  Manning, the super bowl MVP, held the Lombardi trophy high for cheering fans to see. Coach Tom Coughlin, Bloomberg, Gov. Andrew Cuomo and other teammates, waved and grinned from the float as a deep roar rose from the crowds. "All things are possible for those who believe,"  Coach Coughlin said. "We always believed."


This is actually the second Super Bowl championship parade for the Giants in four years. They beat the Patriots in the NFL title game in 2008. Bloomberg asked the crowd today: "Are you feeling deja blue all over again?" *Don't quit your day job Bloomberg*

What was your favorite Super Bowl moment???
Talk Is Cheap- Drop A Dime On Em!
Follow me on www.Twitter.com/MsChynaBlaQ
Posted by Chyna BlaQ at 11:04 PM