Heidi and Seal are headed to Splitsville?!?! 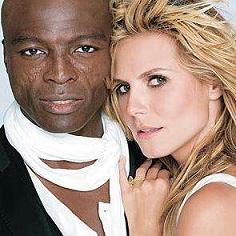 Say it aint so!! America's most favorite Celebrity couple is calling it Quits. Fashion model Heidi Klum and Soultry singer Seal are ending their admirable seven year union. The couple are proud parents of 4 beautiful children, including Heidi's daughter from a previous relationship that Seal adopted.

A joint statement released to the press reads - "We have the deepest respect for one another throughout our relationship and continue to love each other very much, but we have grown apart". Seal has openly spoken about the break up on several television interviews. He is seen still sporting his wedding band and continues to speak highly of  his beautiful wife Heidi.

I don't know about you but, I honestly thought Heidi and Seal were the perfect celebrity couple. How about you???


Did their Break up Surprise you???
Talk Is Cheap- Drop A Dime On Em!
Follow me on www.Twitter.com/MsChynaBlaQ
Posted by Chyna BlaQ at 5:18 PM