Public Displays of Affection: Are you into PDA? 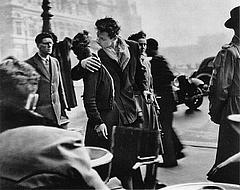 Some people love to kiss, hug and grope their partners in public. Public displays of affection, also known as P.D.A. is the act of openly expressing love and affection in public. You know those long passionate kisses by two lovers standing in the middle of the sidewalk totally oblivious to the traffic of people in circulation around them because they have an intense moment of "frozen in time" passion??!! *Giggle* I'm sure you've seen it before.

Often when we see this 5 minute lip lock action, we tend to say "Get a room!" or "take that s#@t somewhere else!". Public displays of affection can be a turn on for some, but can get a little messy if you let it. Too much public action can make other people feel uncomfortable. I personally think that there should be a 3 minute rule to PDA. Anything lasting more than 3 minutes should be taken indoors for some heavy duty adult action and satisfaction!! What do you think people??


Are you into Public Displays Of Affection (PDA)???

Talk Is Cheap- Drop A Dime On Em!
Follow me on www.Twitter.com/MsChynaBlaQ
Posted by Chyna BlaQ at 5:08 AM